Veridalis
Recently exiled to Puddleby Isle in the Spring of 572. Veridalis was exiled for practicing blood magic in his homeland. Since his arrival here, he has sought to harness the blood magic of this isle as his own, in order to one day destroy Emperor Mobius' armies, and free his homeland.

The battle goes on. I continue to battle undead in hopes of one day becoming a Bloodmage.

I've heard from others that it takes days, but I plan on destroying undead continuously for the next few exile days. At this rate, I know that I will become a Bloodmage soon.

Additonally, I noticed something odd after gaining my first training with the Bloodblade. I learned far more than any on this island would have learned from a single training... I believe that my past knowledge of blood magic is coming back. Again, Mobius' mind-washers must have failed in their attempts to relieve me of my knowledge of battle and blood magic.

It must have been the blood magic that has protected me.
Posted by Veridalis at 12:14 PM No comments:

After qualifying, I joined Zeitgeist (a bloodmage applicant), at the Savannah Cave, home of the Bloodmage order. There, I attempted to enter the order's headquarters (to no avail), as it appears that I need more training with the blade before I can enter. 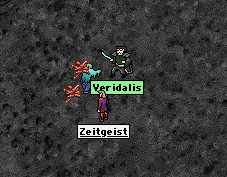 There, we battled with the undead guardians of the order, as they failed to recognize us as allies. 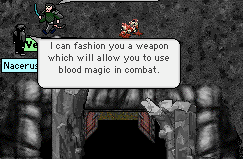 Finally, Nacerus offered me a bloodblade, that which I have been pursuing for so long since my arrival here on the island recently.

After many days at work, without adequate rest. I decided that a long deserved nap was needed. I'll be resting for a little bit now, then I will begin my battle to become the youngest bloodmage. Soon, I will be at my goal, and will begin to draw power in order to one day obliterate Mobius and his false Ascendancy.

Finally, I believe that I've made another friend. Another exile who will help me battle Mobius in the end. So far, I have three allies: Xenos, Creed, and Zeitgeist. I will continue to add their names to my list of those who will help me destroy Mobius and his Sentinels, when the time comes.
Posted by Veridalis at 7:50 AM No comments:

After hours and hours of ploughing through rat towers in Puddleby. It probably took me a total of a few exile days. After all of those long hours, battling on the brink of death, I qualified for the bloodblade.

After this, I celebrated in town center for a bit, and started training with my blade. I hope to train as much as possible, and battle undead constantly for the next few days, so that I may be the youngest bloodmage yet to come. The more power I gain, the more likely I will soon be able to destroy Mobius

*update to come
Posted by Veridalis at 4:22 PM No comments:

There is something strange about these islands... I've been gaining strength at an incredible speed.

I am beginning to believe that Mobius' mind-clearers weren't able to effect me fully. Possibly because of my prior attunement to unholy magic. Their magic must have worked temporarily on me, destroying my prior combat abilities. However, now this knowledge seems to be coming back to me in full force.

I've been battling for some time, attempting to qualify for the blood blade. It's tough work, but soon, I will be able to harness the raw magic energy that I will one day use to destroy Mobius.
Posted by Veridalis at 12:07 AM No comments: 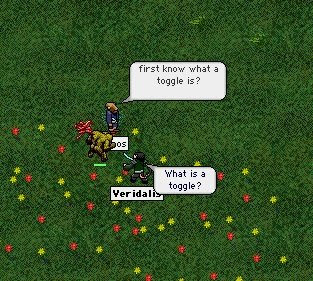 Shortly a zodiac or so after arriving on Puddleby Isle, I found my way to Orga Camp One with directions from an exile. I had hoped to join the Full Moon Orga Camp Raid, but was killed, as all the other exiles were further into the Orga Camp.

A kind exile named Xenos was able to save me, and he began to teach me the ways of Puddlebeans, so that I may not die as easily again. Also, so I would be found more easily, through share toggling.


Surely, without Xenos' help. I don't think I'd be able to have the confidence to find my way around Puddleby Isle, but he drilled direction sense into my head.

After leaving the Meadow, Xenos brought me to the Lily Pond, and taught me to battle fierce creatures. He also taught me the value of companions in arms. 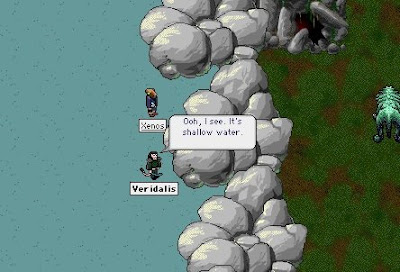 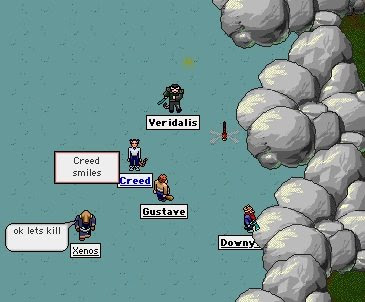 Over all, he taught me a great many things. When I have destroyed Mobius' army of Sentinels, and freed the people from the ascendancy, I am sure that he will always have a place at my side, guiding me down the path of righteousness.
Posted by Veridalis at 6:57 AM No comments:

I've begun to practice long and hard, hoping to earn the honor of the fighter train Evus. So far, he believes I have great potential. The Puddlebean Second Circle has been passed, and I continue to grow in strength. Something about these isles is helping me progress faster than most. I wonder if my prior knowledge is beginning to come back to me?

It seems that Mobius' mind-washers have failed in their attempt to destroy my knowledge for good. I grow stronger by the day. 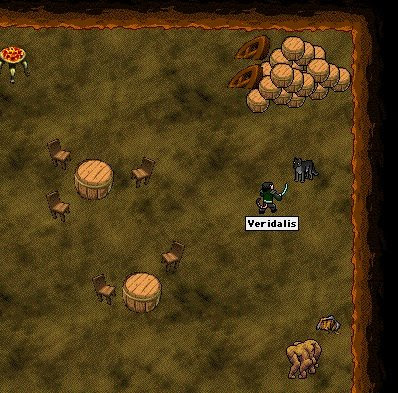 Posted by Veridalis at 6:32 AM No comments:

The journey was long. I was below deck for most of the journey, and was only allowed brief glimpses of sunlight occasionally, when they would take me up for air every week or so. This zodiac-long journey was certainly the most uncomfortable and ill-conceived duty that I have ever faced. Despite what many had said, I do not believe that my exile was legitimate.

Blood-craft should be legal everywhere.

This land is interesting. Many of these self-proclaimed "Puddlebeans", are rather strong. The continual battle with surrounding neighbors has allowed these exiles to build up a large amount of strength. Some day, they may even surpass the strength of Mobius' Sentinels. If that were the case, I will be along-side them, fighting for the freedom that belongs to all of us.

The landscape of "Puddleby Isle" is very interesting. Primarily forested, rocky, with an ocasionaly beach and desert. This island holds many secrets as well. I've learned that there are mysterious beings called "Ancients" here, as well as a mysterious race called "Centuar" that rarely show themselves, and give exiles only limited access to their own island in this chain. The Lok' Groton chain of isles.

Furthermore, the powerful enemies of the exiles are certainly to be reckoned with, the Darshak Theocracy has reached its height in this area, and has grown very powerful. Possibly because of the influence that these powerful exiles have created from their war with the Theocracy and the "Orga" people.

These Orga tribes are highly destructive, and overtly very powerful. Their lands grow in danger the farther that one intrudes into them. Furthermore, this Orga War that is going on has devastated the landscape to the east of Puddleby, obliterating much of the wildlife in the area.

On this island, I believe to have found what I seek... An order of the sanguine. That which I was exiled for in my homeland. Now, I will harness this arcane power to the fullest extent possible.

On this island chain, this power will certainly be attainable. Here, there are no rules. Only power.
Posted by Veridalis at 6:16 PM No comments: